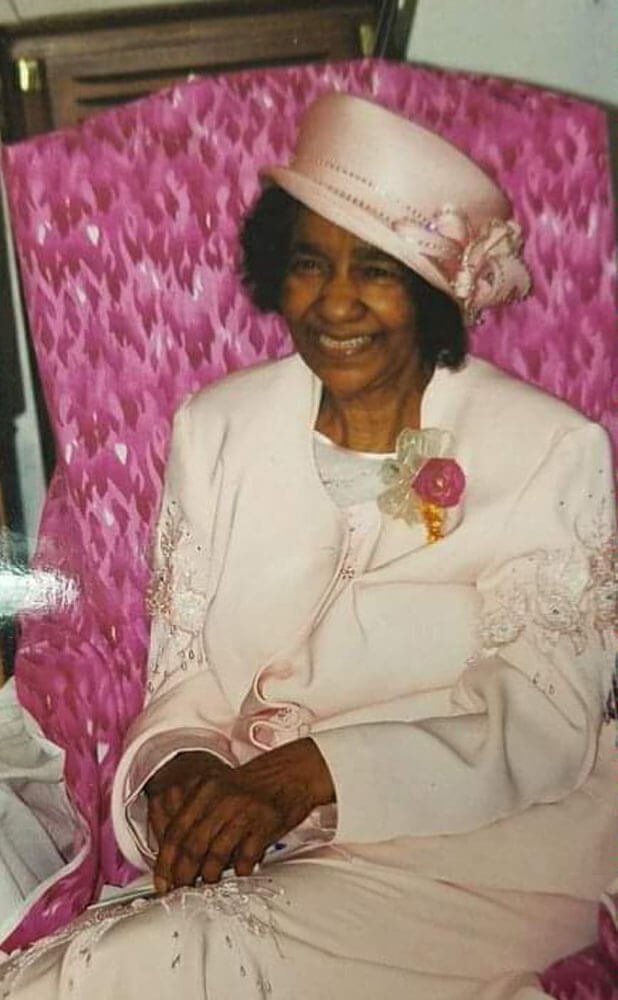 On July 10, 2020 Elder Helen M. McNeil passed on to be with our Lord Jesus. She was born on April, 17, 1933 in Louisburg, NC. She was the daughter of the late Walter Gill, and the late Mary Helen Green Gill.

Elder Helen M. McNeil started preaching the Gospel at age 14. Although by her own testimony she was serving the Lord well before the age of 14. “I was just a baby” she would say. And her father, Walter Gill, recognized her as a minister at an early age. As word spread around her home town of Louisburg, NC, she began to get invitations to speak. People would come from miles around, packing the church to hear such a young preacher of the Gospel. Elder Helen went from church to church preaching the Gospel and souls were saved.

When her mother became ill, Helen went to live with her Aunt Francis Edgerton. But she continued to serve the Lord, and she continued her education. Rev. McNeil briefly attended Shaw University, and then moved to New Jersey, where she met and married her husband, James McNeil.
James and Helen had a double wedding with her best friend Margaret, who married Rudolph Peyton. It was a beautiful afternoon wedding ceremony. James and Helen had three beautiful children, James Jr, Vince Edward, and June Rochelle.

Along with becoming the youngest assistant Pastor of Bethel United Holy Church, Elder McNeil along with best friend Bishop Margaret Peyton, formed a singing group, the “Gospelettes”, and the two women also were co-founders of Mt. Ebenezer United Holy Church in Lambertville, NJ.

Elder Helen McNeil Matriculated from International Seminary with a Bachelors Degree and Masters Degree in Theology. Helen McNeil retired from the State of New Jersey after serving 26 years at Princeton Neuropsychiatric Institute as a Resident Living Specialist.

She once described her life: “It’s been a beautiful life with the Lord, and I love the Lord.”

Elder Helen McNeil’s Viewing and Graveside Service will be held this Saturday July 18, 2020.

We will Live-stream the Graveside service on our HeartVision Church Face Book Page from 12:30 – 1:00pm

Due to the current NJ Covid regulations All attendees must wear Masks and practice social distancing.

Condolences can be posted below or

Please continue to keep the family  in your prayers

I Can Do All Things Through Christ Who Strengthens Me” Philippians 4:13

Quin from Aldie, Va wrote on July 18, 2020 at 3:03 pm:
Rochelle, our thoughts and prayers are with you and your entire family. We are so blessed to have had the opportunity to meet your my mom and experience her kind spirit. Please know that she is in good hands and will watch over you each day. Warmest Regards, Quin/Tony/Landon Watson

Rev. Dr. Carolyn V. Hodge, Pastor, I AM The Living Word Ministries from Upper Marlboro, MD 20772 wrote on July 18, 2020 at 10:01 am:
Dearest Pastor Rochelle. Please know that our hearts and prayers are with you as you walk through this season of grief and loss. Your Mom gave you her greatest gift -- Her sure knowing and love for Jesus Christ, her Savior and the Lord of her Life. Because of her dedicated life to Him, she is now rejoicing in His Holy Presence in His Heavenly Kingdom . I pray that you shall be able to focus on the good memories that you shared with your Mom. These memories of her will help to lift your spirits. It almost goes without saying, and I am certain that you know this -- those of us, who shall remain faithful to and continue to trust in our Savior and Lord, shall be with her again in the Heavenly realm. Hold onto and rejoice in this. Our Ministry is sending a donation to the "Elder Helen M. McNeil Educational Fund" in honor of her loving kindness, hard works, and memory. Many Blessings and Love to you and your family always ... Sincerely, Rev. Dr. Carolyn V. Hodge, Pastor and Founder I AM The Living Word Ministries, Incorporated

Phyllis Daniels Williams from Dallas wrote on July 18, 2020 at 3:47 am:
We are so heart broken to hear about the loss of your Mother. We are praying that God will comfort you and your family through this time of breavement. Melvenia Daniels and Family

Angela Imes from Fayetteville wrote on July 15, 2020 at 9:26 pm:
Soror Rochelle, I am thinking of, fervently praying for and sending sincere condolences to you and your family. I love you dearly and truly. Angela Imes

Tonya mcclamb from Raleigh wrote on July 15, 2020 at 7:02 pm:
June and Willie I met Mrs. McNeil when I came to New Jersey for your wedding. She was sweet,wonderful, and the best host ever. That is the way that I will remember her forever.💚💕

Jamilla Gault from Northern VA wrote on July 15, 2020 at 6:38 pm:
Dear Soror Rochelle, May God comfort you and your family at this time. May you be blessed knowing you were able to care for her until the Lord called her home. Your strength is admired. Gods peace and blessing upon you dear Soror. Soror Jamilla Gault💚💗💚💗

Desha Perkins-Hollie from Brambleton wrote on July 15, 2020 at 6:35 pm:
Sending my deepest condolences on the loss of your loved one. Praying for the entire family.

Robin Harvey from Aldie wrote on July 15, 2020 at 12:47 am:
To Rochelle and family, our thoughts are with you in the loss of Mother McNeil. I am grateful that I had an opportunity to sit with her from time to time when visiting. She will be missed, and although we mourn and feel a tremendous loss, Heaven has gained a powerful women of God - AMEN! Arnold, Alexander and I are praying for your family always. We love you!. With Sisterly Love, Robin Harvey

Willette Y. McIntosh from Morganton, NC wrote on July 14, 2020 at 6:53 pm:
To my darling twin brother Willie and my amazing sister-in-love Rochelle; Words seem so inadequate in this moment to express the love and admiration I feel for Grandma Helen. We always had the most fun together in laughter, and she was truly the example of a Godly woman that we all need. She has without any doubt entered her season of "well done" wearing her beautiful Crown of Life. Blessings and Prayers to you both, and to Conner, Willie IV, Vince, Charnelle, and all the family, and know that the love she felt for each of you will never die. Love and Peace, Cissy

Raburus from Brambleton VA wrote on July 14, 2020 at 11:12 am:
So glad we got to meet her and experience her love of God. Thinking of you and praying for you all during this time. We love you!!

Mary Ward from Chantilly wrote on July 14, 2020 at 3:36 am:
We are so sorry to hear this Rochelle. You all loved and cared for her so well. Our love and prayers are with you! Brad and Mary Ward

Felicia Baldwin wrote on July 13, 2020 at 8:02 pm:
To Rochelle & Family I am so sorry for your loss. I can’t even begin to tell you how much your mother meant to me. From all of her spiritual guidance, her being my bible teacher, and even helping me with my wedding. I will never forget the times when she tried to give me some of her ensure drinks, saying I was too tiny. Her and my mom were friends on earth and now they are together in heaven. My prayers are with you and your family.

Rock & Cindy Roberts from Portsmouth, Virginia wrote on July 13, 2020 at 5:31 pm:
Dear McIntosh and McNeil families, I will miss your sweet mother's earthly presence but will always remember her unfailing ability to remember lengthy passages of scripture in Bible study. She was always a true lady with a gracious presence and heartfelt application of God's word. I pray that her passing was peace-filled and that you all have many warm memories to cherish in the days and years ahead. God bless you and keep you, Cindy & Rock Roberts

Lena Hickman-Miott from Potomac Falls Virginia wrote on July 13, 2020 at 4:53 pm:
Dear Rochelle McIntosh, Offering my deepest condolences during your time of bereavement regarding your dear mother and loved one to your entire family, Elder Helen McNeil. May her fond memories keep you comforted in the many days to come. - Sincere Sisterly Regards, AKA Sorority Member Lena Hickman-Miott, Psi Rho Omega Chapter.

Leslie Haynes from Rockville, MD wrote on July 13, 2020 at 2:11 pm:
Sincere condolences to my Blessed family, as another angel ascends into Heaven. A true and faithful servant, who loved the Lord with all her heart. Your reward is our comfort, as we grieve and miss you here. Rochelle and the entire family of loved ones, we pray for your peace and extend our heartfelt sympathies.

Charnell Williams from Trenton wrote on July 13, 2020 at 1:43 am:
My Chain is BROKEN!!! 😭😭😭 I am really going to miss my auntie.....This is a heavy blow for me. 😭😭😭 She was everything to me. Everyone I'm connected with know that I have such a great LOVE for you. Every year, I made sure we celebrated our birthday's together. You were a woman filled with great WISDOM, and I didn't mind hearing it over and over because it taught me how to act like a lady and how to have a relationship with God. Auntie, I will never forget the stories you shared with me of your childhood and your preaching. Your favorite niece/daughter is going to miss you deeply. I can't be selfish wanting you to stay. God had other plans. You are now my angel to help me find my way. RIP AUNTIE UNTIL WE MEET AGAIN!!! You will never be forgotten!!! Love your daughter #2 Charnell